IL MAGNIFICO LAPISLAZZULI COLLECTION
The Il Magnifico Lapislazzuli collection is inspired by the fascinating and eclectic personality of one of the most famous Medici. Lorenzo Il Magnifico is the embodiment of Florence’s golden age.

THE MEDICI AND LAPIS LAZULI
There is a deep and symbolic connection between the lapis lazuli stone and the Medici. The great Florentine house created one of the biggest collections of lapis lazuli objects of all time.
After the success of Il Magnifico’s previous Red Marble and Green Marble editions, we have chosen to honour the Medici passion for lapis lazuli.

THE ESSENCE OF THE RENAISSANCE
The Renaissance came after the hard years of the Middle Ages and symbolised the return to light, beauty, and harmony.
Two great historical figures played a great role in transforming Florence into the cradle of this golden age: Cosimo de’Medici and his grandson Lorenzo, remembered as ‘The Magnificent’. Under the hegemony of these two influential men, the city of Florence, reached its political, economical, and artistic peak.

MATERIALS
Lapis lazuli has been used from the beginning of antiquity to create jewels and precious objects.
Its magnificent and ever changing shades of blue have never ceased to capture the imagination of mankind.

CRAFTSMANSHIP
The pen’s body is shaped out of a solid block of lapis lazuli by sophisticated machines. In places, the layer of precious stone is quite thin. A true master artisan can sculpt the lapis lazuli without fracturing it.
After the lapis lazuli is shaped, it still retains a rough texture. Florentine artisans manually polish the stone with specialized tools used to polish crystal. The lapis lazuli has been sculpted into an ergonomic shape by hard stone machines.
The Florence baptistry was used as an inspiration for the octogonal shape of the pen’s body. The finishes are silver-gilded.

METAL FINISHES
The cap, blind cap, section and all other metal parts that embellish the pen are made in silver Ag925.
A fleur de lys pattern is chiseled into the two extremities of the pen using a well guarded technique.
Once the engraving is complete, the metal parts are aged and plated in 24kt gold.

CLIP AND BOX
On the silver-gilded cap, notice the handmade engravings of lilies, the symbol of Florence.
The Ponte Vecchio clip was launched in 2003 as an homage to Florence. The bridge that connects two riverbanks is an allegory of the dialogue and connection between different cultures.
The packaging accompanying the Il Magnifico Lapis Lazuli pen is a wooden box, painted a lapis lazuli blue. The lid is decorated with an engraved plaque that mirrors the patterns on the pen’s silver parts. The plaque is gilded using the famous Florentine gold leaf technique.

IL MAGNIFICO LAPISLAZZULI ROLLERBALL PEN
The rollerball pen Il Magnifico reveals yet another fascinating facet of the Medici family and follows the great success of the Marmo Rosso and Marmo Verde editions. 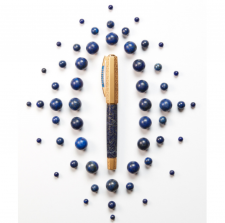 There are no reviews yet.

Only logged in customers who have purchased this product may leave a review.

Item added to your cart

Continue Shopping Go To The Cart
Buy for €200.00 more and get free shipping